With each passing day, when media content is gaining the attention of public discussion, media literacy has become an essential skill for all the media users. Do we really need to apply our critical thinking while reading any media message? Is there any pre-orientation required before engaging ourselves into the media content? Do we need to equip ourselves with the understanding of various media outlets and their functioning? These are the pertinent questions before the information ecosystem today and media literacy deals with all these aspects. Advertising Literacy is another associated branch of media literacy, which deals with the idea that how much information people have about advertisement, their persuasive intent, applied techniques, sponsor and desired objective. Though it is expected from every media user to have basic knowledge about the various media formats, in general it is assumed that a communication learner and practitioner must be having a sound understanding about the above. This research study is an attempt to map the advertisement literacy among the media students of Ranchi. For the purpose of this explorative study, a sample of 100 students selected from different media institutions of the state. The non-probability quota sampling technique is adopted to find out the students’ ability and attitude towards the concept of advertising literacy.

Almost every person in the 21st century is exposed to different tools of media every day, whether it comes in the form of television, radio, newspapers or OTT platforms. An adult in India spends an average of 3-4 hours a day in exposure to some kind of media. And hence anywhere we look, we are flooded by advertisements. Without even realizing we watch hundreds, if not thousands of advertisements every day. The rise of new media has helped in the skyrocketing of online advertising in forms of paid ads, in-app banners, video and streamingads and what not. All this time spent watching or listening to these media messages raises the question, ‘What effects does this exposure to media and especially advertisements create onthe minds of consumers?’

Advertising is a prominent part of our lives today. It is an impersonal communication of information about products, services or ideas through various media, and it is usually persuasive by nature and paid by identified sponsors. (Bovee, 1992).

It is crucial for the introduction of any new product, service or idea in the market. If the advertisement of that product, service or idea is done at the right place by using proper media, it carries the ability to attract new customers. So, ultimately it helps to capture the market and increase the sales. This results in making advertisements a major source of revenue for publishers of mass media like TV channels, newspapers, magazines, and websites. Advertising creates awareness among consumers about the availability of different products and services in the market. It helps consumers to understand why that advertised product is better than any other product available in the market. It also informs consumers about the various features, benefits, price and use of products or services. While creating awareness and passing on relevant information, it ultimately guides a consumer to make a right choice about what to buy.

Overall, advertising is a combination of art, science and profession. The creative skills required making an advertisement interesting and consumer friendly makes it an art. But it also requires systematic and scientific planning. And the fact that it is a job of advertising agencies who follow business ethics and code of conduct for their work, makes it a proper profession.

WHAT IS ADVERTISING LITERACY?

Children’s vulnerability to advertising has been a debatable subject in academics and society for a long time now. The main concern is that until the children reach a definite age, they are less capable to view advertising messages critically and, therefore, are more prone to its influential nature. The long-held perceptive behind this belief is that children’s conceptual knowledge of advertising (understanding of advertising’s intent and strategies) has yet to fully develop. This advertising-related knowledge has often been referred to as ‘advertising literacy’ (Livingstone &Helsper, 2006).

This research aims at exploring whether university/college students of the Mass Communication department in Ranchi possess specific advertising literacy skills and to specify some variables (which are gender and level of education) that affect these skills. Therefore, the objectives of this research are as follows:

The research questions of the proposed study are as following:

RQ.1.What is the level of advertising literacy in the media students?

RQ.2. Are they able to distinguish between content of various media formats?

RQ.3. Do they have the ability to identify the persuasive tactics of an advertisement?

RQ.4. Do they have the ability to identify the bias of an advertising message?

The research design selected for this research is exploratory and the research method is an online survey. This research will use primary data through questionnaires prepared using Google Forms as the tool. The sample size taken for this research consists of 100 students (50 girls, 50 boys) from various colleges/universities of Jharkhand pursuing UG and PG in mass communication. The non-probability quota sampling technique is adopted to select the sample of population.Quota sampling is a non-random sampling technique in which participants are chosen on the basis of predetermined characteristics so that the total sample will have the same distribution of characteristics as the wider population (Davis, 2005).The sample for this study was drawn from students pursuing UG and PG degrees in mass communication at several institutions and universities in Ranchi. This study used a sample size of 100 students, both male and female. A questionnaire using Google Forms was distributed among the students of 6 colleges/universities of Ranchi namely: Central University of Jharkhand, Ranchi University, Amity University, Usha Martin University, St. Xavier’s College and Gossner College.

THE SCALE AND VARIABLES

The exploration is done on the basis of the scale developed by Rozendaal et al. (2014). The scale uses various variables in order to receive a better understanding of the level of advertising literacy of an individual. The same variables have been used in this study to find out the understanding and attitude of media students of Ranchi. They are as follows:

On the basis of education level

On the basis of variable ‘Recognition of Advertising (RA)’ 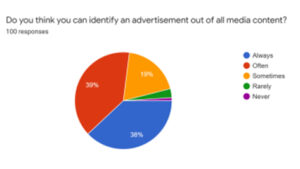 Fig. 4 shows that when asked whether the respondents can identify an advertisement out of allmedia content, Fig. 4 shows that 38% answered ‘Always’, 39% chose the option ‘Often’, 19%selected ‘Sometimes’, 3% chose ‘Rarely’ and 1% selected ‘Never’.

This shows that a major number of mass communication students of Ranchi are able to distinguish between content of various media formats. Their recognition of advertisements out of all other media content is intact.

On the basis of variable ‘Understanding Selling Intent (USI)’

This shows that the ability of understanding the selling intent of an advertisement varies among the students. Most of them understand that advertisements’ sole purpose is to promote and sell products to the consumers through media tools. However, the number of students who do not support this statement is alarming.

On the basis of variable ‘Understanding Persuasive Intent (UPI)’

On the basis of variable ‘Understanding Persuasive Tactics (UPT)’ (a)

Fig 5: Pie-chart representation of respondents’ understanding of persuasive tactics (a)

Fig. 5 shows that only 23% of all respondents strongly agree that the purpose of commercials depicting happy children using the marketed product is to persuade parents to believe what the ad claims. This statement is supported by 49 % of respondents. 21 % chose the Neutral option, indicating that they are undecided. Only 7% of those polled disagree with the stated assertion. The assertion is not strongly disagreed with by any of the respondents.

On the basis of variable ‘Understanding Persuasive Tactics (UPT)’ (b)

Fig 6: Pie-chart representation of respondents’ understanding of persuasive tactics (b)

Fig. 5 and 6 collectively show that the students’ ability to understand the persuasive tactics used in advertising is excellent. They know how advertisers and brands use psychological maneuvers to make people lean towards them.

On the basis of variable ‘Understanding Advertising Bias (UA

On the basis of variable ‘Perception of Indented Audience (PIA)

Fig.8 shows that 35 % of respondents can always identify the target demographic of commercials, 36 % can do so often, and 17 % can only do it sometimes. 9 % of respondents had difficulty identifying the target audience of a given advertisement, while 3% have never been able to do so. This shows that majorly the students have the knowledge of demographics and can differentiate between various advertisements’ target audience.

On the basis of variable ‘Skepticism toward Advertising (SA)’ (a)

Fig.9: Pie-chart representation of respondents’ skepticism toward advertising (a)

On the basis of variable ‘Disliking of Advertising (DA) 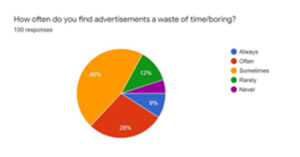 This study explored the level of awareness and understanding of the concept of advertising amongthe media students of Ranchi’s colleges and universities and their attitude towards it in terms ofrecognition, selling and persuasive intent, persuasion tactics, bias, target audience, skepticism andliking of advertisements.

The researcher’s study of the data gathered; revealed that the overall level of advertising literacy among media students at various institutions in Ranchi is adequate, but it has to be refined further to reach a more advanced level. The concept of advertising is well-understood among these students. The majority of them are aware of advertising terminology such as recognition, selling intent, persuasive intent, target audience, persuasive strategies, and advertising bias. They understand what is being presented to them and why it is being presented to them. They are capable of analyzing the substance and hidden messages of advertising attentively. When it comes to their perceptions of advertising literacy, they exhibit a promising level of skepticism and distaste for advertisements. They are aware of what they see and will receive if they purchase and use that particular goods or service.

The results reveal that the majority of these students have a decent understanding of how advertising procedures and elements work. They are aware of the benefits and drawbacks of advertising and conduct their own research before falling into the traps set by advertisers. They also have their own opinions on advertising strategies and the ability to choose whether or not tosupport a particular brand. It is also clear that they are unconcerned not only with whose brand is advertised, but also with what is really advertised.

There are clear reasons why the study’s target audience, media students of Ranchi, is already well versed in advertising. Because advertising is a part of the mass communication curriculum, students will undoubtedly have some knowledge and awareness of the elements of advertising. Despite having advertising as part of their curriculum, a tiny but considerable portion of the population continues to struggle with the DOs and DON’Ts of advertising. They have difficulty recognizing various aspects of advertising, which has an impact on their decision-making processes. They cannot judge if the lifestyle that is being advertised is real or not. They cannot make up their minds if the advertised product is a right choice for them or not. They are not aware about how the algorithm of the modern digital world works in terms of advertising.